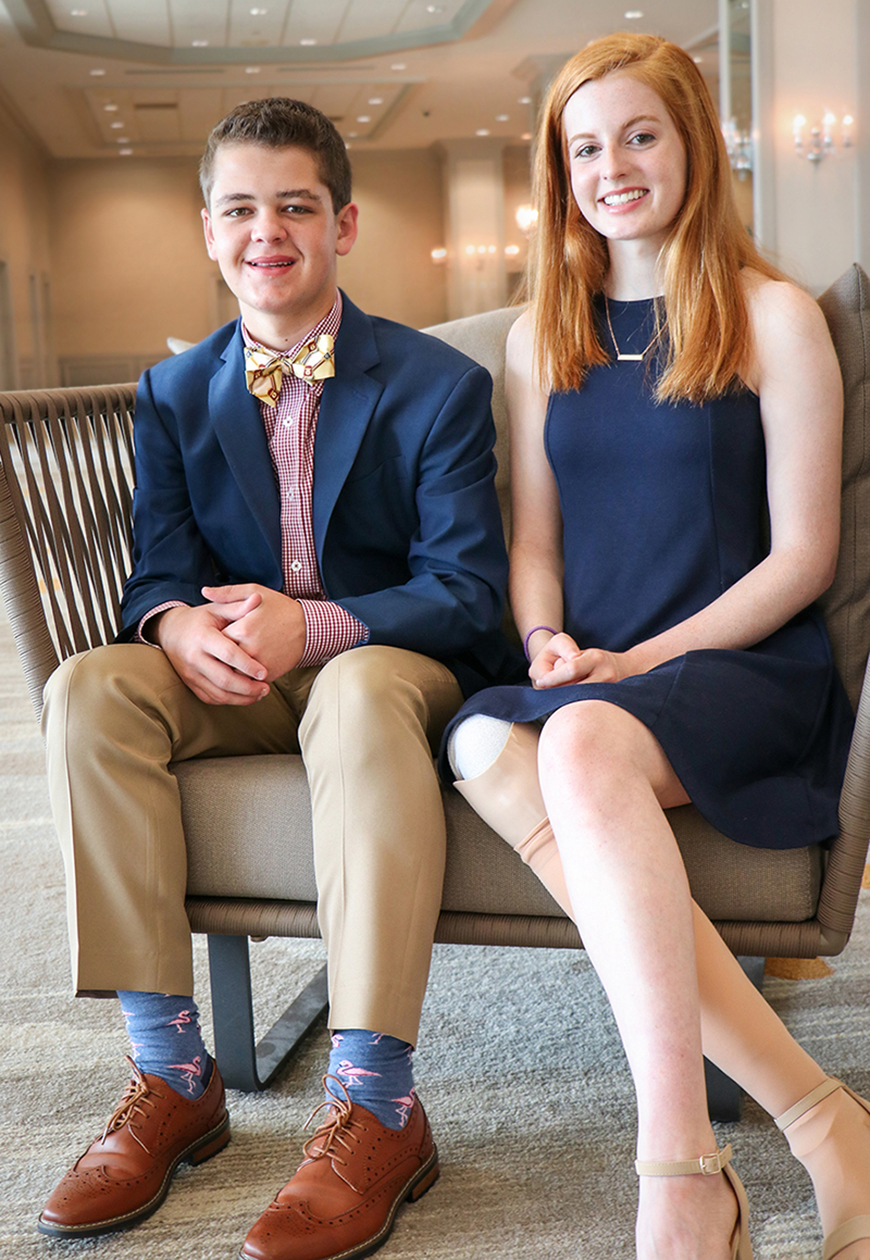 Every year, Shriners Hospitals for Children selects two National Patient Ambassadors to represent the health care system’s patients. The new ambassadors are announced at our Imperial Session (annual convention). They spend the year sharing their stories of perseverance in the face of adversity, and the ways Shriners Hospitals for Children has made a dramatic, life-changing difference in their lives. Meet Lily and Riley, our two new National Patient Ambassadors:

Lily, age 18, from Paducah, Kentucky, was born with fibular hemimelia, meaning she did not have a fibula, the outer thin bone that runs from the knee to the ankle, in her right leg. She underwent a Syme’s amputation, which is an amputation done through the ankle joint that helps to preserve the heel pad, and she received her first prosthesis a few months later.

When Lily was 18 months old, she became a patient of Vishwas Talwalkar, M.D., pediatric orthopaedic surgeon at Shriners Hospitals for Children Medical Center — Lexington, in Kentucky. Over time, Lily has undergone five surgeries at the Lexington Shriners Medical Center to straighten her remaining right leg, and has received several prosthetic limbs.

Lily used to play soccer and dance, including performing in The Great Russian Nutcracker with the Moscow Ballet. She completed two youth triathlons, served many times as a page in the Kentucky General Assembly, and was a member in the Paducah Symphony Youth Chorus. She continues to play piano, both as part of her studies at the University of Kentucky, and as an extracurricular activity.

“I hope to be a nurse at Shriners Hospitals for Children after graduating,” said Lily. “It is my dream to help provide the same care I received all my life to others, as a way to show my gratitude for the Shriners health care system.”

Lily has been a huge asset as a patient ambassador for the Lexington medical center, where she has volunteered for numerous patient events and played a prominent role at the dedication ceremony of the new facility on May 20, 2017. She also represented the Lexington medical center as a standard bearer at the Shriners Hospitals for Children Open in Las Vegas in 2016, and is now looking forward to becoming a National Patient Ambassador.

“I am so glad I get to be a National Patient Ambassador and talk to other patients and families who are going through the same things,” said Lily. “Somewhere out there is at least one person who needs to hear what I have to say.

“Shriners Hospitals for Children has helped me to not see my leg as a handicap, and instead to look at it as a challenge. Because of the Lexington Shriners Medical Center, I wake up every morning thankful for two legs instead of regretting that I only have one.”

Riley, now age 17, was born with the genetic condition hereditary multiple exostoses (HME), which causes irregular bone growth. Exostoses are more commonly known as “bone spurs,” which typically grow on the end of long bones during childhood and adolescence. In Riley’s case, physicians discovered growths from nearly head to toe through a full body X-ray when he was 14 months old.

Shortly thereafter, he was seen by Alfred V. Hess, M.D., the director of hand surgery at Shriners Hospitals for Children — Tampa, and became a patient of the hospital. Over time, Dr. Hess and Shriners Hospitals for Children — Tampa’s Chief of Staff Maureen Maciel, M.D., have performed more than a dozen surgeries to remove growths and lengthen bones in Riley’s arms and legs.

Riley has been a very active patient ambassador for the Tampa Shriners Hospital for several years and represented the hospital as a standard bearer at the Shriners Hospitals for Children Open in Las Vegas in 2017. “It was an amazing experience,” Riley said. “I’m so thankful to have been chosen and to have had the opportunity to meet patients from other hospitals. I’ll always remember it.”

Riley is very generous, and eager to help others. He mentors Theodore, another child with the same rare condition, which Riley describes as being “one of the best things that happened to me this year.” Theodore’s mom has said that meeting Riley and his family gave them hope.

Riley’s father, Rick, and the rest of the family have actively supported a golf tournament organized by Rick’s former employer. Since 2002, the C&W Charity Golf Classic has raised more than $500,000 for Shriners Hospitals for Children.

Riley’s parents are thankful for the constant care provided by the Tampa Shriners Hospital staff. They have seen drastic improvements over the years, which has enabled the high school student to remain active in basketball and other physical activities.

“I will always have this condition, which has given me a new perspective on life,” said Riley. “This disorder isn’t a crutch; it isn’t an excuse. It’s a reminder of all the amazing people I have met.”